Recent reading: Hell Hath No Fury: A True Story of Wealth and Passion, Love and Envy, and a Woman Driven to the Ultimate Revenge 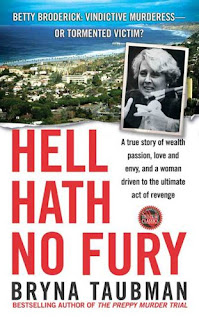 Hell Hath No Fury: A True Story of Wealth and Passion, Love and Envy, and a Woman Driven to the Ultimate Revenge by Bryna Taubman

I'll get to the book. But let's face it, we're all here because of the USA miniseries that just ended. So...

So...USA Network's Betty Broderick miniseries (under the umbrella of Dirty John, apparently now a franchise) wrapped this week and as much as I was all over this series, I found the final episode rushed and unfulfilling. I don't know why they didn't dedicate more than one episode to Betty's two trials and I'm boggled they didn't include any sort of follow-up info at the end of the episode. Not even a slide mentioning that in addition to her over-the-top crazy behavior back in the day she has blown two parole hearings and is still incarcerated because even now, all these years later, she refuses to express any kind of remorse, not even the minimal obligatory amount that would give her a chance to be released from prison. In case her story from the breakdown of her marriage to the histrionics during her trial didn't show her to be obsessive, narcissistic, entitled, and dangerous, she continues to be her own worst enemy while simultaneously living in the fantasy world of her warped perception - still, to this day - where she was and is the true victim, not the two people she shot to death on November 5, 1989, more than thirty years ago. She hasn't evolved one bit since then.

When I first heard about this miniseries I wondered how in the world they would top the 1992 TV movies starring Meredith Baxter (A Woman Scorned: The Betty Broderick Story and Her Final Fury: Betty Broderick, the Last Chapter). Baxter's out-of-control portrayal of a woman who was, well, out-of-control earned her an Emmy nomination. You really got a sense of how delusional and bonkers Betty was, how she could wear people down and leave utter wreckage in her wake while justifying it all.

First, let me get the obvious out of the way: Amanda Peet's performance in the Dirty John version is also going to get her an Emmy nom and possibly a win. She created a Betty separate from Baxter's, a daunting task, and I would love to have seen her get more opportunity to show Betty's over-the-top performance at her trials. I'd also like to give props to Christian Slater, who I think did a great job as Dan Broderick. Like Stephen Collins (in the Baxter version) before him, Slater had a difficult task not being totally overshadowed by Peet as Betty, but he really gave a lot of depth to a non-confrontational man confronted by an increasingly unhinged force of nature he mistakenly thought he could control.

And sadly, as in the real-life trial and coverage, Linda Kolkena Broderick, despite having been murdered in cold blood, runs a distant third. She's a young and beautiful upbeat contrast to what the short-fused Betty has become. Was she unqualified for the job Dan self-servingly gave her and did she knowingly have an affair with a married man? Yes, and that's a story too, and not necessarily a pretty one. Did she deserve to be shot and killed at the age of twenty-eight? No. But all we really know about her from this show is she was a trophy wife.

Portrayed by Rachel Keller (who was fantastic in season two of Fargo), she is largely ornamental, although she does get in a couple good scenes where Linda performs Betty's notorious obscenity-laced answering machine rants for her shocked friends. But I didn't think Keller got nearly the opportunity to flesh out Linda as much as Michelle Johnson did in the Baxter version, although I would go to bat for Keller as the far superior actress.

Another thing that bugged me was that one of Betty's issues, in addition to aging, was weight gain. At the time she shot Dan and Linda she had socked on about 60 pounds, not an insignificant amount. Peet's Betty was tall and lean to the end. I don't know if Peet refused to gain weight for the role or a fat suit wasn't working, but this was a glaring omission. I kept waiting for her to get bigger and she never did, and I found it distracting.

I thought the Baxter version did a better job of showing Betty wearing out her friends with her years long, non-stop obsession with Dan and Linda. In the USA version there were hints, but then suddenly her friends were testifying against her with a vengeance and it was kind of jarring. If you didn't know better, it was like they were friends one day, then turned on her the next. From what I've seen and read over the years, Betty's friends went above and beyond for her, until they just couldn't do it anymore. I feel like this series did them a disservice in that respect.

Also, at the time Betty shot her victims she had a boyfriend who spent nights at her home, although after her arrest she downplayed the relationship. This was proof that in addition to being well-educated and described by those who knew her as capable of being smart, witty, and fun, she was able to get on with the relationship aspect of her life. She had options most divorced women could only dream of. She could have had a life beyond Dan, - and thanks to Dan, who was court-ordered to pay her $16,000 per month alimony - a financially privileged one. That she couldn't - or wouldn't - move on speaks volumes to her obsessive need to punish Dan and Linda for having a life beyond her. There was absolutely no mention of the boyfriend in the miniseries. I could excuse this omission if this was a 90-120 minute MOW that had to make some hard editing decisions, but an 8-hour miniseries that took its sweet time with other aspects of the story...not so much.

I did think that it was a neat observation of Betty not being able to take responsibility for her actions when, at the end of the final episode, Betty (to the tune of "The Twelfth of Never", her and Dan's song) relives some of her self-sabotaging behavior with more constructive reactions than the crazy ones she actually committed: not crashing her truck into Dan's house after receiving news that Dan had sold their old home, not dumping the kids on Dan (thinking he wouldn't be able to deal with them; not only did he deal, Betty inadvertently gave him the custody she would try and fail to recover), and showing up for her divorce poised, sane, and coping. Yet these were followed by a sequence where Dan doesn't deny his affair with Linda the first time Betty asked about it (he would deny it repeatedly before finally admitting Betty's suspicions had been right all along), instead admitting right off the bat that he was in love with Linda. Even when Betty (in what was no doubt a fictionalized sequence) could own up to her own shortcomings, they had to be offset with one of Dan's. Betty couldn't take complete ownership of her actions, and she still can't today.

Having said all of this, the USA version is still totally worth watching. Great acting, great writing, great directing, just great...at least up until the end.

Finally to the book. Hell Hath No Fury is a quick read (I bought it in the afternoon and finished it in the evening) but it is packed with information about the Betty Broderick case. It doesn't go into a lot of depth where Betty and Dan's early years are concerned, but it also doesn't leave out issues the USA version skipped over, including Betty's boyfriend. It's pretty much stripped down and factual.

One of the things the miniseries could have addressed was the Broderick children in the aftermath of Betty's conviction. Their mother deprived them of their father, and to this day they remain divided on whether or not Betty should be in prison. There's also no follow-up on Linda's family and friends, not to mention the loss of the children she would have had with Dan. In the book, it's indicated that her father couldn't bring himself to attend the trial of his daughter's killer, although Linda's sister made a victim's impact statement just prior to Betty's sentencing.

Towards the end it seems like the book is going to get preachy in Betty's defense, but then it veers right back into acknowledging that killing Dan and Linda - whatever their faults - wasn't justified. If you want additional info and background on the case, this book is a great addition to the USA miniseries.

Kerry Wells, growing exasperated, pointed out that Betty wasn't nearly as helpless as she had portrayed herself. Betty had expressed herself vehemently to everyone she met, and she had frequently threatened to kill Dan Broderick. Betty's response drew gasps from the courtroom spectators: "I never did anything. Those were just empty threats."