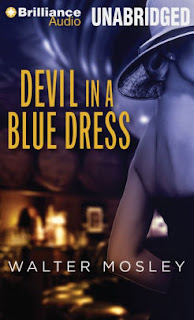 I had bought the audiobook for Devil in a Blue Dress (beautifully and dramatically read by Boatman) earlier this year in anticipation of attending Bouchercon 2020 in Sacramento. The conference was supposed to take place in October, but has been canceled and replaced by a virtual event thanks to COVID-19. Mosley had been named the recipient of this year's Bouchercon lifetime achievement award.

A couple years ago when I was doing a lot of driving between my old place in Marina del Rey and here in Arcadia, I went on quite the audiobook kick. Since I'm not doing much long distance driving these days my audiobook consumption has slowed way down. When I originally bought this, I was considering driving to Sacramento and figured this would be a good soundtrack for the trip.

One of the highlights of a previous Bouchercon was seeing Mosley walking through the hallway between panels. For me it was like spotting a celebrity. I can now check him off my list of legendary must-read L.A. writers, which includes Chandler, Connelly, Ellroy and Wambaugh.

The story is set in post-World War II Los Angeles, where war vet Ezekiel "Easy" Rawlins finds himself in his friend Joppy's bar musing over the loss of his job. It's not the loss of the job itself that pains him - his biggest concern is paying the mortgage on his beloved home. In addition to taking a great deal of pride in being a homeowner, Easy genuinely loves the place. In a striking passage he talks about his home the way a man expresses his love for the woman who is the great love of his life.

One of the things that struck me early on about Devil in a Blue Dress is that it could serve as a master class on getting right into the action. Before we ever learn about Easy's financial predicament, an imposing white man clad in a white linen suit, white shirt, white socks, and white shoes topped by a Panama straw hat has entered the bar, an establishment that does not see a lot of white customers, and is promptly introduced to Easy by Joppy. Turns out the man, Dewitt Albright, is looking to hire someone for a job and Joppy, who vouches for the guy, has offered up Easy because Joppy knows he could use the money.

Although put forward in a convoluted way that leaves no doubt that there is a certain amount of danger inherent, the job itself seems relatively simple. Albright is looking for a young white woman with a penchant for hanging out at black clubs around the city, and he needs someone who knows these places and the people who inhabit them to track her down. The job pays well and despite some misgivings, Easy, visions of mortgages dancing in his head, decides to accept.

This sets into motion a series of events that include murder, corruption, pedophilia, and unrequited love. Easy eventually realizes that he's bitten off way more than he intended, but although he occasionally considers walking away he is always compelled to see it through, especially where his mesmerizing quarry Daphne Monet is concerned. There is also a truly golden moment where Easy, seemingly in over his head, begins to admit that he's getting to like the whole private investigator thing, a combination of the exhilaration of the chase, not being beholden to a set schedule or the whims of an employer, and at least partially feeling like he's his own boss. The money isn't bad either.

With help from "Mouse" Alexander, an old and dangerous friend from his native Houston, Easy navigates the complex set of circumstances that have led a number of men to pursue Daphne Monet for a number of reasons. Easy's eventual hard won survival and success is the perfect setup for him to continue work as a private eye.

Devil in a Blue Dress was made into a 1995 film starring Denzel Washington as Easy Rawlins, Jennifer Beals as Daphne, Tom Sizemore as Albright, and Don Cheadle as Mouse.

I drove back to my house thinking about money and how much I needed to have some. I loved going home. Maybe it was that I was raised on a sharecropper's farm, or that I never owned anything until I bought that house, but I loved my little home. There was an apple tree, and an avocado in the front yard, surrounded by thick St. Augustine grass. At the side of the house I had a pomegranate tree that bore more than thirty fruit every season, and a banana tree that never produced a thing. There were dahlias and wild roses in beds around the fence, and African violets that I kept in a big jar on the front porch.

The house itself was small, just a living room, a bedroom, and a kitchen. The bathroom didn't even have a shower, and the backyard was no larger than a child's rubber pool, but that house meant more to me than any woman I ever knew. I loved her, and I was jealous of her, and if the bank sent the county marshal to take her from me I might have come at him with a rifle rather than to give her up. Working for Joppy's friend was the only way I saw to keep my house.