Recent reading: "All I Ever Wanted: A Rock 'n' Roll Memoir" 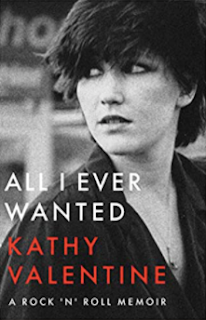 All I Ever Wanted: A Rock 'n' Roll Memoir by Kathy Valentine

The recent Go-Go's documentary on Showtime sent me on a big fat nostalgia-fest about 1980's Los Angeles and the 80's in general, plus I was a big fan of the band back in the day. One of the many things I took away from the doc was that among all the Go-Go's, bassist Kathy Valentine was the one who really seemed to understand what they had, how amazing it was, and how lucky they were to have it. As the band crumbled around her Valentine tried desperately - and unsuccessfully - to keep them together. It made me want to read her memoir, released earlier this year.

Growing up in Texas, Valentine was "raised" by a single mother who was more interested in having a good time than in parenting. As a result Valentine grew up without a lot of supervision and she grew up fast. She lost her virginity before she even entered her teens, requiring an abortion at age twelve. Her mother turned it into a fun trip to California, abortions not being available in Texas at the time.

During a trip to her mother's native England, Valentine saw Suzi Quatro perform on Top of the Pops and was riveted by the idea that a woman could be more than an ornamental lead singer backed by men, or part of a girl group programmed by men. Upon returning home she began learning to play the guitar and became obsessed with being in a rock band. She attended countless shows and became a student of music and musicians. And she eventually started playing in bands.

At nineteen Valentine decided to try her luck in Los Angeles. There, in late 1980 she met Charlotte Caffey, a member of the Go-Go's, who although not yet signed to a label were enormously popular in the L.A. music scene. The Go-Go's had a problem: they were scheduled to play a series of shows over New Year's but their bass player, Margot Olavarria, was ill. Caffey asked Valentine if she could play bass. Valentine, a guitarist, said yes, then spent three cocaine-fueled days and nights learning to play a borrowed bass and the Go-Go's songs.

By the time the shows were over and the new year had been rung in, Valentine was in love with the band and they seemed to return the sentiment. Margot, who had been with the band through much of their growing popularity was unceremoniously dumped, although there was more to it according to the documentary: she had been voicing dissatisfaction with the band's changing sound. The Go-Go's had begun as part of the 1970's L.A. punk scene, but by 1980 they had drifted toward a decidedly non-punk girl-pop sound and image that would soon take the world by storm. Valentine was deemed a better fit and the invitation to join the Go-Go's gave her not only the band, but also the family she had always craved. It also gave her a Go-Go's dependent identity that would make it difficult to function when the band imploded a few years later.

The Go-Go's were finally signed by I.R.S. Records and proceeded to make history when their debut album Beauty and the Beat became the first album by an all-female band who wrote their own songs and played their own instruments to top the charts. Suddenly, they were stars.

One thing I noticed from both the doc and Valentine's book is that for as hard as the Go-Go's worked to become successful, once they achieved success and stardom they often didn't seem to want to work to keep it, nor did they seem at times to appreciate it. They complained about the production on the album that would make them world-famous. They complained about having to make the "Our Lips Are Sealed" video that put them in heavy rotation on MTV and boosted their visibility. I can remember a clip from back in the Go-Go's heyday of Belinda Carlisle being interviewed while she signed some albums or posters (I can't remember which) and she complained about having to be in an office signing autographs instead of being at the beach. I remember wondering what the hell she was complaining about. She was in such an enviable position, and one she'd worked hard for. I couldn't figure out what her problem was.

Another thing I thought was odd was that despite their hard-partying ways, no one in the band seemed to realize that Caffey had a serious, years-long heroin addiction. When Paula Jean Brown joined the band after Jane Weidlin's departure, she picked up on it right away. In fact it was Brown who flat-out asked what they were going to do about it. And it was Brown, who had experience dealing with addicts and interventions, who helped Caffey into rehab, probably saving her life.

The Go-Go's achieved overwhelming fame and success at relatively young ages - they were in their early-mid twenties, and as Valentine describes herself, seemingly with the maturity of teenagers. Despite the fun they had together, they could also be insensitive to each other at times. Weidlin's departure was partially fueled by the band's refusal of her request to sing one single song on their third album, Talk Show. It wasn't even one of the singles and she made the request because the song was important to her. Being turned down was the beginning of the end of her Go-Go's days.

There were also hard feelings about the discrepancy in their paychecks - as the primary songwriters, Caffey and Weidlin out-earned the others to a point where it festered. Never mind that it required them to do a lot of work the others weren't doing.

But the cruelest act of all was when Carlisle and Caffey decided to end the band without including Valentine or drummer Gina Schock (much less newbie Brown) in the decision. Kathy and Gina were suddenly summoned to the band's manager's office where they were blindsided by the news that the Go-Go's were no more, news that was delivered coldly by Belinda and Charlotte. Valentine's dreams and the only real family she'd ever been a part of were over and there wasn't a thing she could do about it, and it left her floundering. Her heavy drinking and cocaine use didn't help.

Valentine spent several years attempting to recreate the magic of being part of a successful band, but was never able to duplicate the experience of the Go-Go's. When she finally got sober she also seems to have grown up and gotten not just older, but wiser. If I have a complaint about the memoir, it's that she rushes through the years following her sobriety and the first Go-Go's reunion.

And even after that first triumphant reunion, there are issues. Valentine makes a barely passing reference to being "fired" by the band in 2012 but doesn't elaborate beyond that; her wikipedia page indicates that she had to drop out of a Go-Go's tour due to a broken wrist, but also filed suit against her former bandmates in 2013. Ever the dysfunctional family that can't quite seem to go their separate ways, Valentine has toured with the band since then. Ever the peacemaker, Kathy doesn't seem to be able to ever completely quit this group of women, no matter what they put her through. I don't think it's insignificant in the documentary (which I thought was excellent) that each Go-Go was interviewed separately. We only see them come together again as a band for yet another reunion at the very end of the film. I came away from both the documentary and the book feeling like Kathy deserved better.

I'm glad that Valentine seems to have made peace with the demons of her earlier years, but I wish she had spent more time in the book on her later years and the Go-Go's on again/off again relationship, plus it also left me wanting to know more about her post-non-Go-Go's life. But All I Ever Wanted is still an impressive memoir of rock & roll, bygone eras, the sheer love of music, and a really admirable woman and musician.

Gina spoke up: "It's our band, too; you can't just decide it's over." Belinda looked Gina dead in the eye and told her, "Yes, we can."

Suddenly Charlotte proclaimed, "I write the hits and she is the voice." It enraged me. How dare she? After everything, after the tours and radio visits and shows and interviews that gave us our careers, all of it done together, Miss Hits and Miss Voice were tossing us aside with less emotion than getting rid of old clothes.