So Blogger has come up with a "new interface" that everyone seems to hate but they have decided to force on users. This is my first post under the new version and like many other users, I hate it. I'm a big fan of if it ain't broke, don't fix it. And it wasn't broke. So for some reason they decided to not just break it, but fuck it up.

Another thing I noticed, as I searched "Help" is that they have locked and disabled commenting on almost EVERY SINGLE THREAD that criticizes the new version. REALLY???

Here are just a few examples: 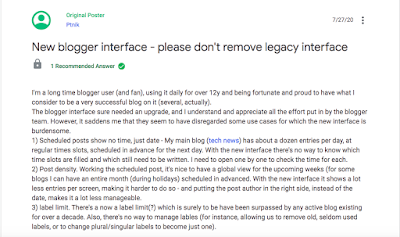 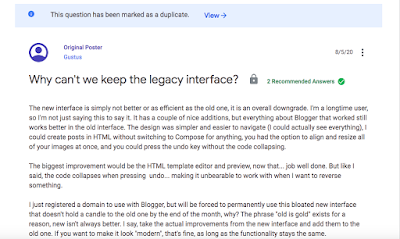 I could go on and on, but you get the idea. And even what I'm seeing on the screen typing this is clunky as fuck. God knows what it will look like when I post it.

For years I've been hearing about how WordPress is the go-to platform for blogs. I tried it out at one point and did not find it anywhere as user friendly as Blogger. I don't want to switch. But if Blogger doesn't get its shit together and actually listen to its users, I may have to become part of an exodus. I don't want to, but this new version just sucks. I am literally looking at the images on my screen and can't read them.

Whoever came up with this "upgrade" should never again be allowed anywhere near a job that even remotely involves computers, blogging, and/or web design. And locking damn near every conversation in Help that complains about how awful the new version is...well let's just say we've reached a new level of customer service fail. Not a good look, Blogger.

Posted by Melinda at 7:46 AM
Labels: Blogging, I Customer, Jerks