No one lives forever 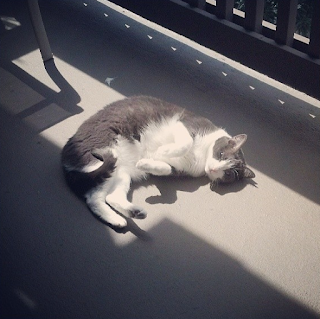 I've held off on mentioning this because I'm still wrapping my head around it, but I got some bad news from the vet last week about Sophie. She's fine for now, but her blood and urine work brought some disturbing information. Based on her labs, the technician said that she is expected to develop chronic kidney disease in the next year.

I did some research and chronic kidney disease is pretty much an old-age issue in cats, and although it's hard to accept, Sophie is officially elderly. She turned fifteen in September. Wilma, the cat I had before her, made it to eighteen, a good old age for a cat. I've also seen people who had cats make it to twenty, but unfortunately I don't think that's going to be the case here. I'll be happy if she can have a couple more good years. Actually, I'd be happy if she lived forever, but that's not going to happen. Time marches on, and it kind of sucks.

Updated 11/11/20: Sophie had dental work yesterday and they removed two more teeth. They wanted to take a third that wasn't as bad, but her blood pressure under anesthesia wasn't cooperating, so they decided to leave that one for another time.

She was really loopy yesterday when I got her home. It was like watching someone who's drunk trying to act like they're fine. She's still acting a little weird this morning, so I'm going to stay home with her today.

I also got more clarity on the kidney disease. First, it's more like she has a 90% chance of having it in the next 24 months. About 50% of senior cats will develop kidney disease. They often see it developing in cats between ten and twelve years of age, so Sophie being fifteen means it could have been worse - she could have developed it years ago. I asked the vet if there was anything I could do now to help out, and she recommended putting her on a diet geared to cats with this disease. I noticed they mentioned a change of diet when I was researching this, but I'll probably put her on it now instead of waiting until she's sick. We're going to wait a couple weeks until she's had her dental recheck, but then they're going to give me a couple of cans to see if she'll accept the new food. So I feel better about that, for now.