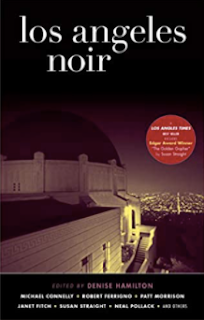 Part of the Akashic Noir series, this collection includes contributions by the likes of Michael Connelly and Naomi Hirahara. One of the stories, Susan Straight's "The Golden Gopher" earned an Edgar Award. Two additional stories, Connelly's "Mulholland Drive" and Robert Ferrigno's "The Hour When the Ship Comes In" were included in Best American Mystery Stories 2008.

For me the standouts were "Mulholland Drive" with its double-whammy of a twist regarding the protagonist and some serious karmic retribution, Hamilton's "Midnight in Silicon Alley", set near my old place in Arcadia, "Kinship" by Brian Ascalon Roley, and "What You See" by Diana Wagman.