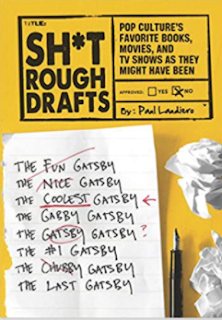 Sh*t Rough Drafts: Pop Culture's Favorite Books, Movies, and TV Shows as They Might Have Been by Paul Laudiero

I almost feel like I'm cheating because this was such a quick read, but it was a fun read too.

This book is Laudiero's take on what some pages of famous rough drafts of books and scripts might have looked like, especially if had they been written by a comedian (Laudiero is a member of the Upright Citizen's Brigade and the introduction in the book is hilarious). The inspiration is a quote from Ernest Hemingway that, "The first draft of anything is shit."

Scenes are recreated, alternate titles are considered, and notes are given. Here are a few examples:

The Old Man and the Sea by Ernest Hemingway:
Santiago was a man, and men fish. Fishing is the best thing a man can do. Other than bullfighting. I love bullfighting.
Note: Ernest, every time, why?
The Road Not Taken by Robert Frost
Two roads diverged in a wood, and I-
I took the one less traveled by,
And I have been lost for forty five minutes
A list of potential names for Los Pollos Hermanos in Breaking Bad (followed by notes):
The Chicken Brothers (Too plain)
Las Pollas Hermanas (??)
Las Drogas Hermanos (Too obvious)
Pollos y Metanfetamina (No!)
Kentucky Fried Methamphetamine (Are you kidding?)
Meth, Meth, Meth (NO!)
This is a Regular Chipotle (We need to talk...)
From the film Apollo 13:
INT. NASA CONTROL
NASA CONTROL
This is Houston, say again please?
JIM
Houston, we have a problem. (boring)
Houston, we got an issue.
Houston, we got a bit of a bugaboo.
Houston, we done and shit the bed.
Houston, something is beeping. (circled)
Houston, we fucked up.
Houston, Tod dropped the ball again! (Who is Tod?)

"What do you do in your room all day?" his landlady asked him. "I smell funny smells and hear strange noises all the time."

This was true, as he was working on his scone recipe at the time.

Also, he was building a monster.

My favorite was the title page for The King's Speech:

Note: This is offensive David.

All in all, this is a small but fun read, especially for writers struggling with their shitty firsts drafts.
Posted by Melinda at 2:13 PM
Labels: Books, Film, Screenwriting, Television, Writers, Writing