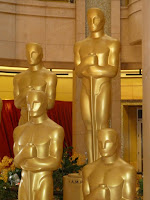 So in case you hadn't heard, last night the Academy Awards were held for a bunch of 2020 movies that barely saw the light of a movie theater.

Because of the pandemic, this was no ordinary Oscars, which was held at Union Station in Downtown L.A. and not at the event's usual home at the Dolby Theatre in Hollywood.

One thing that didn't change was the opulent swag bag handed out to nominees in the Director, Actor, and Actress categories. This year's bag was worth a whopping $205,000 each. You can see the dizzying list of items in the bag here. I thought about actually making a list then decided not to torture myself, as it's a mind-boggling collection of excess (although if anyone wants to gift me a trip to Golden Door, I'd happily accept). The only thing that made me feel better about the bag is that the recipients at least have to pay income tax on its value.

Unfortunately for the show itself, a change of scenery didn't seem to inspire a more entertaining awards show than we've seen in the past. Here is a boatload of mostly harsh reviews courtesy of PrimeTimer. Alison Martino of Vintage Los Angeles had a brilliant suggestion about honoring the unusual and historic location, which no doubt would have been an improvement to the show. Maybe next year they should hire her to be part of the production team.

One of the stranger things the producers did was moving the Best Picture announcement to third from the end, rather than at the end as has always been done. There is a lot of talk online that they did this in the belief/hope that the late Chadwick Boseman would win Best Actor (for a number of reasons) and they felt what no doubt would have been a very emotional acceptance speech by his widow would be a great capper to the evening. Instead, Anthony Hopkins won and on top of that wasn't present to accept the award in person, so what was supposed to be a big finish to the show ended up being embarrassingly anti-climactic (or so I've read; I haven't actually watched an awards show in years). But it ended up backfiring on them big time. I bet they move Best Picture back to the finale next year.

I can almost understand their reasoning. Boseman's death was tragic (he was only 43), he was gifted, respected, and well-liked, and it would be the last opportunity for the Motion Picture Academy to honor him. It's easy to see how he would have been a deserving sentimental favorite in the vein of Heath Ledger. Add in the whole "Oscars So White" movement over the past few years and Boseman seemed like a shoe-in. But in retrospect, that's what happens when you pander and/or try to make a big change just for the sake of doing something different. It can bite you in the ass big-time.

There's also a great article in the PrimeTimer link that opines that the change ended up being unfair to the producers of Nomadland, three of whom were women, robbing them of their big moment at the conclusion of the broadcast. It's an interesting take and I don't completely disagree.

Congratulations are due to Hopkins for becoming the oldest Best Actor winner at age 83. It was his second win in six nominations, and his first since winning for his portrayal of Hannibal Lecter in The Silence of the Lambs. Also congrats to Frances McDormand, who became a three-time Best Actress winner last night, and just for good measure scored a fourth Oscar as a Nomadland producer. In unrelated news, The Brother and I are going to see a screening of Fargo on the big screen this weekend. There is no limit to how many times I can watch McDormand as Marge Gunderson.

Another criticism I'm seeing a lot of was the In Memoriam segment. When will awards show ever learn that if there's one thing fans and viewers don't want less of, it's this segment? If your broadcast is going to be bloated anyway, take a couple minutes more to honor your dead. And include everyone. I can't remember the last time there was an awards show and there weren't complaints about people being left out. You'd think producers would pick up on that at some point.

And now early ratings are in and they aren't pretty: Oscars Ratings Crash To All-Time Low; Viewership Falls Below 10M For First Time Ever. These are only early Nielsen numbers, but they're still horrific:

In delayed fast national results just released by Nielsen, the 93rd Academy Awards were watched by a mere 9.85 million, with a dismal rating of 1.9 among the 18-49 demographic.

That is an all-time low for Hollywood's biggest night - by a huge margin.

I'll leave you with this, because it's freaking hilarious, although I'm pretty sure they cleared out any homeless near Union Station so the beautiful people didn't have to see what's becoming increasingly common in Southern Cal neighborhoods: 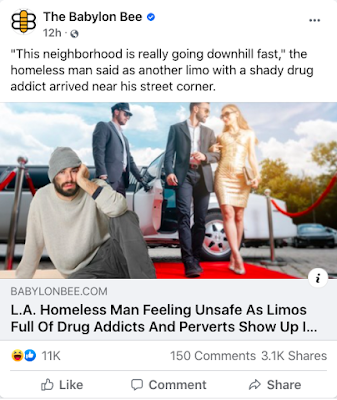 Updated 4/27/21: Final numbers pushed the audience up to 10.4 million - still a stunning fall from grace for a broadcast that used to be a worldwide event that few missed.
Posted by Melinda at 11:50 AM
Labels: Downtown L.A., Film, Historic Los Angeles, In the News, LOL, Los Angeles, Only in L.A., Screenings, Television