First up, something fun: Steve Buscemi handed out Halloween candy dressed as his 30 Rock character that has become a popular meme. 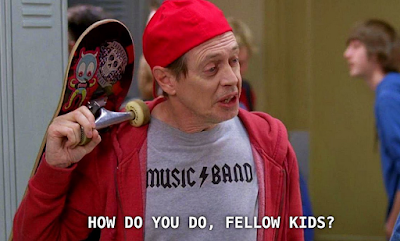 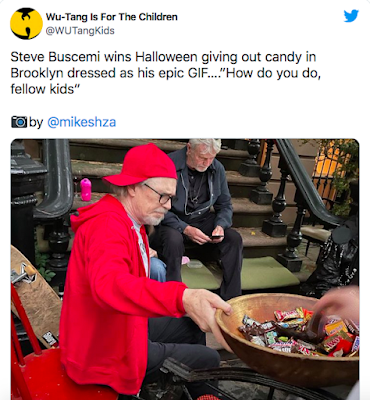 On a less savory note, did you know that there is now such a thing as "the cancellation scam"? Some writer for Jezebel does; apparently it's where a celeb intentionally provokes outrage for publicity. However, using what the writer perceives as Dave Chappelle's "fear of irrelevance" as an example of this is kind of a stretch. If there's one performer today who doesn't need to worry about being irrelevant, it's Chappelle, and that was the case well before The Closer. There are plenty of celebrities desperate to stay in the spotlight, but history has shown that Dave Chappelle isn't remotely close to being one of them, much less "dependent" on it. But in their desperation to rip Chappelle, apparently some people are able to make such ridiculous reaches that I wonder that they don't dislocate their shoulders reaching so hard.

This is the guy who walked away from a $50 million deal back in his Comedy Central days, and as a fan of his show it was a huge loss. But unlike a lot of other people in the entertainment industry, Chappelle has stayed on an even keel, living in Ohio with his first and only wife and their children, and without a lot of the gossip-worthy drama that afflicts other famous people. And another thing - I'd be willing to bet a lot of people griping about The Closer haven't watched it in its entirety. It makes me wonder if these aren't the same people who hounded Daphne, and if - like me - you've actually watched the show, you will know what that means.

Tough news: Steve Carlson, who portrayed one of the hockey playing Hanson Brothers in the immortal Slap Shot is in need of help. He was recently diagnosed with Stage IV metastatic squamous cell carcinoma and needs financial assistance with costs related to his treatment. The good news is that you can help out. His Go Fund Me is here.

The Hanson Brothers make their insane debut as Charlestown Chiefs:

And how bonkers is it that I never knew until now that Steve Carlson spent some time as a Los Angeles King?

If you can, put on some foil for a brother.

Greatest news of NO CANCER!  I'm cancer free, gaining weight and healing.
Yesterday at my six month post chemo/radiation appointment the PET scan revealed Stage 4 Cancer is gone!
I cannot thank you for your support during these last 10 months.
We wouldn't have been able to make it without your help.
Now that I know the fight, I will continue to bring more awareness to the struggles of this disease.
Few of many struggles:
Isolation
Financial
Emotional
Mental
It was the toughest fight of my life .
Thank you for your donations your cards your prayers and friendships.
If ever I can lift someone up in prayer or spirits please email us!
Steve Carlson

You guys, the wait is almost over! Dexter: New Blood debuts this coming Sunday.

The return of our favorite sociopath/serial killer will go a long way towards easing the pain that the return to Pacific Standard Time (also next Sunday) always causes me. Dark at 5pm? That sucks so bad.

And now I have to get writing - today is the first day of NaNoWriMo. Have a great week everyone!