Meghan Markle has been making an unfortunate spectacle of herself since the day she was fixed up on a "blind date" with some random British guy she had never heard anything about, had no idea who he was, and didn't bother to Google, mewling only (she says), "Is he kind?"
The funny thing about that particular story (one of her many works of fiction) is that according to many sources, if someone asked the same of her the answer would be a resounding, "HELL, NO!"
I won't get into the countless times she has slagged the royal family, their customs and protocols, and their people since that fateful, gold-digging date; they are legion and you could probably find them by using that Google thing. Some info can be found here, and keep in mind that book was released in 2020, before things got really ugly. Abusing palace staff as well as driving the then-Duchess of Cambridge to tears (then lying and claiming she was the one left crying), and generally acting as if it wasn't just her husband who'd been to the manor born.
Keep in mind, most of us (me included) had no idea who Meghan Markle was when she arranged to be fixed up for a hot date with a ginger prince, and we would still have no idea today had she not managed to get him to put a ring on it. Without marrying up, Suits would most likely have been the high point of her Hollywood career. Her acting was apparently mediocre at best. Heck, did you see The Queen's performance in the Paddington Bear skit for her Jubilee? Probably better than any of Markle's performances. Certainly more sweetly sincere.
Speaking of her performances and her insistence on playing the race card, how about this tidbit? A while back, someone on YouTube did an analysis for Markle's imdb entry. She specifically looked at how many of the characters she played were important enough to warrant a full first and last name. Here are the results, from most recent:
Rachel Zane - Suits (series)
Amy Peterson - When Sparks Fly (TV movie)
Charlotte Boyd - Castle (series)
Officer Leah Montoya - CSI: Miami (series)
Jr. FBI Agent Amy Jessup - Fringe (series)
Holly Shepard - Without a Trace (series)
Annie Ortiz - Knight Rider (series)
Sadie Valencia - Good Behavior (TV movie)
Kelly Calhoun - The Apostles (TV movie)
Veronica Perez - CSI: NY (series)
Teresa Santos - Love, Inc. (series)
Notice anything? Out of the eleven roles she played that warranted a full name, five of the eleven - almost half - have Latina/Hispanic surnames. Montoya, Ortiz, Valencia, Perez, and Santos. Latinas.
This tells me a couple of things: One, that her mixed race wasn't much of a barrier to being cast (her acting, on the other hand...) Casting agents seemed to find her believable as both Latinas and non-Latinas. Word is some of her high school classmates assumed she was Italian. But the point is, these roles were given to a non-Latina actress and therefore took career and employment opportunites away from actual Latina actresses. If Meghan was so attuned to all the racial stuff she claims to be a victim of, shouldn't she have declined these roles? Surely a small price to pay to make the world a better place, empower her Latina sisters, and all that other self-made, independent woman stuff Markle is fond of blabbing about.
And now word is coming out that Markle is already wanting to know about her inheritance from the Queen and titles for her half-royal rugrats. Couldn't even wait until the woman has been buried. Greedy and grasping. Having said that, I would pay top dollar to see this scenario play out: 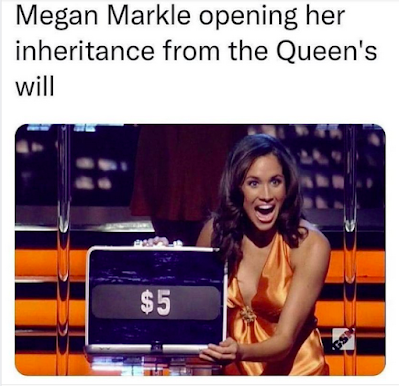 Her Majesty was nobody's fool. My guess is that any inheritance Prince Harry and his children receive from her will be part of a trust with strict guidelines about how the money can be accessed and used in order to be kept out of Meghan's grubby mitts.
Posted by Melinda at 4:03 PM
Labels: Famous Idiots, In the News, Jerks, LOL, Television