When companies merge (or one company buys out another) there's usually cuts to be made as the two streamline into one. While many of these cuts - as unpleasant as they may be for the people involved - are necessary, the recent Warner Bros./Discovery merger just took out an expected target.
It was announced today that the famous Warner Bros. TV Workshop, which includes both writing and directing programs, is being shut down. The writers workshop has been around for forty years, while the directing track was added in 2014. It has been a great opportunity for a lot of people to get their start in the business, and the shutdown was unexpected.
Another aspect of the workshops I noticed were some interesting comments on the Deadline article (linked above) was about the people who are being selected for the programs. 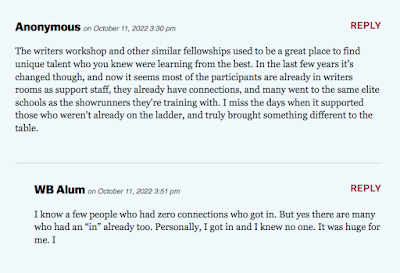 A few years back I submitted my Better Call Saul spec from my UCLA Extension class to both the Warner Bros. and NBC/Universal TV Writing Workshops, to no avail. Fair enough, but I did notice that when they announced the selections, it did seem as if almost every participant already had a foot in the door in the industry. Many were already staffed as assistants on existing shows. Maybe this experience made them seem like better candidates to make the most of the programs, but it also sent a clear message that the selection processed favored applicants who already had connections. Not all, but it didn't hurt. I remember feeling like it was kind of a waste of my time to apply if I wasn't already similarly situated.
But that and other issues not withstanding, this is a bitter loss for aspiring TV writers and directors, not to mention kind of a sad commentary on the industry as a whole. When I worked in post production WBTV was the leading producer of TV out of all the studios. I don't know if they still are, but it made sense for them to actively cultivate new talent, especially talent that might not have found a way into the industry yet. From both a writing and industry standpoint, I just think it's an unfortunate decision. Somewhere out their is a writer who will not be getting an opportunity in the future because of the loss of the program, and who otherwise might have been the creator of a future hit show.

UPDATED 10/12/22: Due to blowback from the industry and the DGA, Warners has rescinded their decision to cut the Workshops and will transfer them from the TV division to their Diversity, Equity, and Inclusion unit. Which is great news, but it also begs the question of if the program will become less about promoting promising talent and more about promoting underrepresented groups only. But hey, it's a start.
Posted by Melinda at 4:43 PM
Labels: Historic Hollywood, In the News, Screenwriting, Television, TV Specs, Writers, Writing