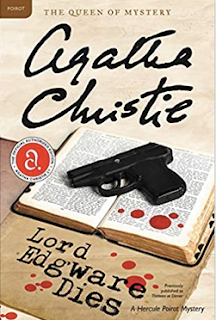 Lord Edgware Dies by Agatha Christie
Read by Hugh Fraser
Insomnia! That's how I got through this one so quickly. All in one day (and night) in fact.
American-born actress Jane Wilkinson, who thanks to her marriage to an English nobleman is also Lady Edgware, begs Poirot to persuade her husband to give her a divorce. The Edgware marriage went south quickly and now Jane has a wealthy duke willing to marry her if only she can escape her loathsome spouse who is refusing to cut her loose. But of course, things are not as they seem. Not only has his Lordship been agreeable to the divorce for some time, he quickly ends up a murder victim. There is no shortage of suspects and it's up to Poirot's famous "little grey cells" to sort it all out. And there is a lot to sort out in this one.
Bonus points for this being the first time I got to hear Fraser's impersonation of Philip Jackson's Inspector Japp, in addition to being able to continue to enjoy his terrific impression of David Suchet's Poirot. It was kind of weird though, that in the novel the trio of Poirot, Hastings, and Japp weren't as sympatico as portrayed in the series, but probably more realistic - they are three very different types. But the differences between the novels and the beloved series, they continue...
Posted by Melinda at 10:47 AM
Labels: Books, Crime, Television, Writers