Lets just use the correct terms, shall we?  Pedophiles and perverts.  Also, criminals.

This is an honest-to-God news story: Mental health group looks to remove stigma from pedophilia.


A group of psychiatrists and other mental health professionals say it's time to change the way society views individuals who have physical attractions to children.


According to the group...the speakers in attendance concluded that "minor-attracted" individuals are largely misunderstood and should not be criminalized even as their actions should be discouraged.

The "I'm the victim here" card, with total lack of acknowledgement of the real victims.  Poor dears, they're just misunderstood.  Then there's the real world, where sexual abuse and sexual assault are sick, vicious crimes and should be treated as such regardless of the motivation behind these acts.  And since we're whining about stigmatization, how about the shame, pain and permanent scars inflicted on their victims?

Critics of the conference say it was a thinly veiled attempt to make children of any age sexually accessible to adults.


"Absolutely," Dr. Judith Reisman, a visiting professor of law at Liberty School of Law said. "Oh, they're very clear about that. Their goal is to take all shame out of the lust for children."

Agreed.  A shameless - and shameful - attempt to normalize perversion and criminal activity, by claiming they can't help who or what they're attracted to.  Next thing you know, they'll bust out the "born this way" card and anyone who expresses objection to them and/or their actions will be tagged with increasingly meaningless labels like hater or bigot and be told they need to stop judging and embrace diversity.

If this kind of stuff is actually going mainstream, I can easily envision a twisted day when a public figure expresses their intolerant disgust of "minor-attracted persons" and are forced to do the public apology walk of shame to salvage their reputation and career.  Maybe put in a supportive appearance at a Minor-Attracted Pride event for good measure.


The American Psychiatric Association did not participate in the conference, and evidently does not condone the group's message.


"An adult who engages in sexual activity with a child is performing a criminal and immoral act and this is never considered normal or socially acceptable behavior," the APA wrote in a 2003 position statement.

I don't even have children and I still feel a natural, instinctive desire to want to protect them from anyone who would do them harm, especially from pedophiles and the idiots who defend their actions and inclinations.  Here's an idea - stop coddling criminals and start sympathizing with people who really need and deserve it: Their victims.  And think of the children for a change.

At this rate eventually all types of sexual behavior will be "normalized" and nothing will be criminal.  Maybe that's the point.  There's tolerance, then there's just total jettisoning of decency and common sense, but given increased sexualization of children over the past few years, I guess we shouldn't be surprised at a story like this.

I just put this up a few posts ago, but apparently it bears repeating.  From Post Secret: 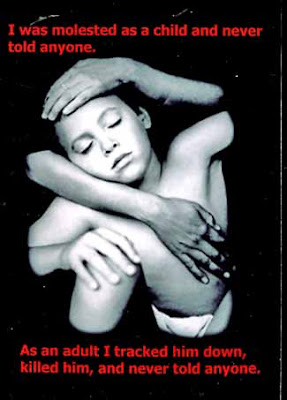 Posted by Melinda at 10:44 AM
Labels: Crime, Jerks, Stranger Than Fiction