This panel featured authors who have also excelled in other areas of writing besides books.


Goldberg's extensive television credits include Diagnosis Murder, Spenser: For Hire, Baywatch, Monk, 1-800-Missing, Psych, and The Glades. Sutton is an Emmy/Writer's Guild/Peabody winner whose credits include Newhart, Cheers, Boston Legal, Terriers, and the feature The Fan. Byron is a journalist and playwright who has written for Wings and Just Shoot Me; her upcoming novel is described as a "Cajun cozy". Pelonero is a playwright whose new book examines the life and infamous death of Kitty Genovese.

I've seen Goldberg on a number of panels, and he never fails to entertain. He talked about ghost-writing his mother's San Francisco society columns as a teen and an early job writing fake letters to the editor for Playgirl (his girlfriend was an editor for the magazine). Discussed the main difference between writing scripts and novels: You can get inside the character's heads. With scripts, you just write dialogue and action.

Sutton started out as an actor and recommended acting classes for writers.

Byron pointed out that when you're writing for television, you have to write in someone else's voice. When writing novels, you can write in your own voice.

Pelonero: "Character is everything."  Wrote her Kitty Genovese book because although a number of books about the murder exist, she felt that they only focused on Kitty's death, neglecting her life. She interviewed Winston Moseley, Kitty's killer, for the book after corresponding with him for several years.

During the Q&A, the writers were asked how they felt about the level of intelligence of their audience and if this affected their writing. This resulted in two very different answers. Suttons said he nevers writes down to readers/audience. Byron said that when she worked on Wings, a frequent question among the writers and producers was, "Do you think the Timmys will get this?" "Timmys" referred to what Byron described as the "itinerant masses". Got quite a reaction from the crowd.

After the session, I headed into the book room to browse and the authors were all there for book signing. I was intrigued by the Kitty Genovese case, so I bought a copy of Pelonero's book and she kindly signed it for me. 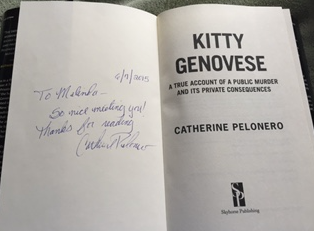 I have to say, right off the bat, that my favorite part of this highly entertaining and informative session was Harris comparing working with HBO (True Blood, based on her Sookie Stackhouse series) unfavorably compared to working with the Hallmark Channel (the upcoming Aurora Teagarden series starring Candace Cameron Bure). She described Hallmark as "professionally happy" and HBO as "scary" and "cutthroat" (and they once kept her waiting 45 minutes for a meeting). She accentuated the difference by describing their parties: HBO's featured men clad in only loincloths and red glitter, while Hallmark's party theme was Christmas in July, complete with Dickens carolers.

Harris has sold over 30 million books and Bilmes has been her agent for all of them. He read her first manuscript during a rain delay at Shea Stadium.

Bilmes on breaking into and working in Hollywood: