A Boston area independent bookstore employee got quite the reaction out of the internets yesterday when he published this condescending, self-important piece: A Bookseller's Elegy.

Douglas Koziol apparently has taken exception with the popularity of the New York Times bestseller Hillbilly Elegy: A Memoir of a Family and Culture in Crisis by J.D. Vance. A partial description of the book from the back cover:

From a former marine and Yale Law School graduate, a probing look at the struggles of America's white working class through the author's own story of growing up in a poor Rust Belt town.

Hillbilly Elegy is a passionate and personal analysis of a culture in crisis - that of poor, white Americans. The disintegration of this group, a process that has been slowly occurring now for over forty years, has been reported with growing frequency and alarm, but has never before been written about as searingly from the inside. In Hillbilly Elegy, J.D. Vance tells the true story of what a social, regional, and class decline feels like when you were born with it hanging around your neck.

The book has received rave reviews from a multitude of publications including The New York Times, Wall Street Journal, National Review, The Economist, New York Post, Christianity Today, Washington Post, Toronto Globe and Mail, plus the Institute of Family Studies.

Koziol apparently doesn't agree, which has created a bit of a personal and moral dilemma for him, which he summed up as:

What can you do when a customer wants a book that you not only find objectionable but also believe actually dangerous in the lessons it portends amidst such a politically precarious time?

Oh, I don't know. Ring up his purchases and politely wish him a good day? Because you are not the bookseller, you are a clerk. The store's owners are the booksellers and they have chosen to carry this book. It isn't your call.

A lot of people took exception not only with Koziol's desire to lecture his customers about their taste in reading, but with the condescending, hectoring tone of the piece. Here are a few samples:

But when it comes to the above conversation concerning J.D. Vance's bestselling memoir, there is something a bit more personal at stake, viz, my moral objection to the book that has become, for conservative and liberals alike, a means of understanding the rise of "Trumpism." And while it's easy enough to take this moral high ground, it comes into direct conflict with that old chestnut about the customer always being right, to which even the most fiercely independent of bookstore largely adhere.

Even now, I fear that I'm slipping into a haughty and unproductive tone - that of an ideologically perfect soul who can't seem to break through to the rubes.

You're not slipping into it, you're already there.

I can hide the stacks of Hillbilly Elegy in the back (if my boss is reading this, I'm just kidding). But I suspect that the most fundamental thing I can do is also perhaps the most trite: I can try to start conversation.

Yes, just what the "rubes" want from their local bookstore - a "conversation" about how awful they are, but luckily Douglas Koziol is here to enlighten them. Also, I hope his boss did read this and fires him, because he just cost their bookstore some business. Again, it's not the cashier's call on whether a book should be stocked and sold - it's the owner's. This is an hourly job for Koziol. For the bookstore's owners, it's their livelihood, and he just stuck a dagger in it by trash talking customers. Remember Borders?

Listening to what made the person gravitate towards the book in the first place, listening while withholding judgment, listening as if I don't know all the answers.

How fortunate we rubes are to have Koziol willing to debase his all-knowing self to help us see the light.

And let's also look at the most obvious fallout: this guy has just driven more customers away from bookstores and toward Amazon. In fact, you know what I did after reading his diatribe against a book I hadn't previously heard of? I went to Amazon and bought it. Vance should pay Koziol commissions. In fact, the article may have something to do with this: 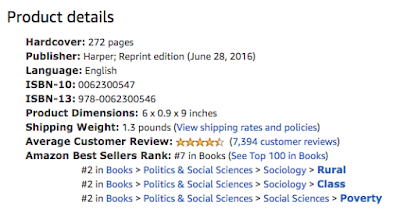 And just a friendly reminder that Hillbilly Elegy isn't a work of fiction. Vance lived it. Koziol apparently would like to see him silenced. How tolerant and open-minded of him. I don't know how he finds to time to work in a bookstore, seeing how busy he is being such a saint.

Of course, this being the internet, the responses were the best part. 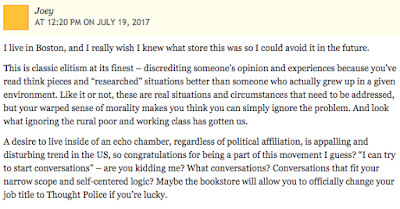 Posted by Melinda at 1:10 PM
Labels: Books, I Customer, Jerks