Recent reading: "Mad as Hell: The Making of Network and the Fateful Vision of the Angriest Man in Movies"

I've decided to do my "recent reading" posts individually, rather than in groups of books. First up: 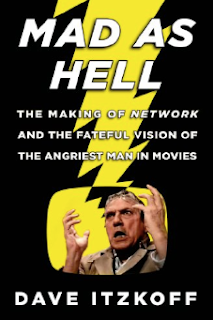 Mad as Hell: The Making of Network and the Fateful Vision of the Angriest Man in Movies by Dave Itzkoff

This is a terrific and comprehensive behind-the-scenes look at the career of writer Paddy Chayefsky and the creation of his strangely prescient 1976 masterpiece Network.

The awards-laden Chayefsky had already established himself as one of America's greatest writers well before Network. A product of what was regarded as the Golden Age of American television (which also produced writers like Rod Serling, Horton Foote and Gore Vidal), he already had two Oscars, a Golden Globe, and three Writers Guild awards to his name before unleashing on an unsuspecting world a film that reflected his concern about the power of television news and the effect it was having on the American public. One can only wonder what Chayefsky would have made of television and the mainstream media today. Network is positively Orwellian in its vision.

The film was nominated for ten Oscars and won four: Chayefsky for his screenplay, Faye Dunaway for Best Actress, Beatrice Straight for Best Supporting Actress, and most notably Best Actor Peter Finch, who became the first person to win a posthumous acting Oscar.

Such is its scope that in addition to telling the story of Chayefsky's life and career, the author interviewed current news anchors for their take on Network and Chayefsky's uncanny predictions of the co-mingling of news and entertainment, all controlled by giant conglomerates more interested in ratings, earnings, and the cult of personality rather than the sanctity of informing the public. But probably the biggest irony of Chayefsky's story is how he was regarded as an angry outsider (albeit a gifted one) in the entertainment industry back in the seventies, but would probably be regarded as a right-wing nutjob today given his unabashed American patriotism and his love of and belief in its greatness.

I saw a meme recently that stated that in the past, you watched the news and then decided what you thought about it, but today you watch the news and are told what to think, and then have to decide if it's actually news. I think this is largely accurate, and it makes me wonder, if Chayefsky was mad as hell about the state of network news in the 1970's, one can only imagine the script he would have written on the topic today.

Also, Network is a fantastic film. I highly recommend both it and this book.

Starting fresh, he sketched out the premise of a fictional news anchor he variously called Holbein, Munro, Kronkhite, or Kronkheit (whether intentionally or accidentally, he did not use the more customary spelling), who has a "crack up on the air" in prime time, unexpectedly boosting the ratings of his show and creating expectations for more extreme behavior in future broadcasts. This could provoke his TV rivals to have to keep pace with his outrageousness or provide the framework for a story about his network being swallowed up by a sinister multinational corporation. "So far," Chayefsky wrote, "Kronkheit hasn't done anything but express outrage. But: What would happen if he started inventing news - The basic joke is that the networks are so powerful they can make true what isn't true and never even existed - The networks are so powerful they make the ravings of the maniac Kronkheit true." 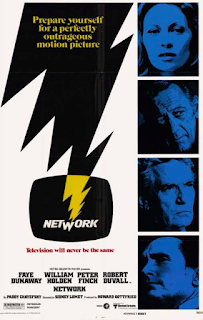