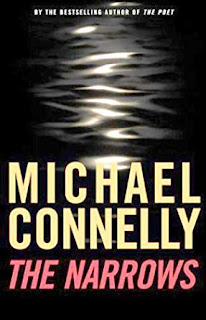 The Narrows by Michael Connelly (audiobook read by Len Cariou)

Another older Bosch audiobook - I scored a trio of them from the Manhattan Beach Barnes & Noble a few weeks ago. That was a good shopping day.

Harry is now retired from the LAPD and working as a private investigator when he's called on by the widow of Terry McCaleb, an old FBI agent friend who has died under suspicious circumstances. The case puts him on a collision course with current FBI agent Rachel Walling, who is pursuing a notorious serial killer known as The Poet who has recently resurfaced. The fact that The Poet is also a former FBI agent who mentored both Walling and McCaleb back in the day is what causes the cases to cross over and introduce Bosch to Walling, who also turned up later in The Overlook.

While all this is going on Bosch is also getting to know his young daughter Maddie, and gets the call from former partner Kiz Rider about rejoining the LAPD, which led to The Closers. Gotta say, it's a testament to Connelly's talent that even though I'm catching up on the Bosch novels completely out of order, I have no trouble keeping track of who's who and how they all play into each story.

The case takes Bosch from Los Angeles to Catalina Island to Las Vegas, then back to L.A. and even into the L.A. River. There were a number of clever reveals in the story and Connelly kept the tension high, but I wasn't sure I liked the very last reveal about McCaleb's death. I thought it was a bit of a reach. But there were a ton of things to love, so overall I enjoyed it.

I'm now starting on The Crossing, which is read by Titus Welliver, who plays Harry Bosch in the Amazon series. Welliver took over the audiobooks after being cast and while he has a great voice it's going to be weird not to hear Cariou, who did his usual fine job. It must have been a bummer for him to lose the Bosch audiobook gig, especially since he did such a great job.