The unexpected return of "LAst Resort"

It's been two years since LAst Resort, the short story anthology that made me a first-time published author, was released. So you can imagine my surprise when this popped up on my Facebook feed today: 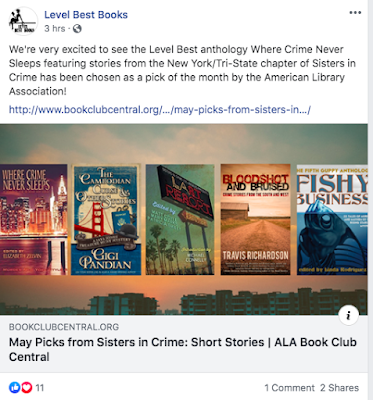 Why yes, that is LAst Resort right smack dab in the middle of the image! Hello again, you beautiful cover you!

I thought maybe it was an old post that had cropped up for some reason, but when I checked the link, I discovered that it is a current article. Not sure why it's coming up now as a recommendation - that really came out of the blue - but I'm certainly not going to argue with it. Gotta admit, it was nice to see it again. Welcome back old friend!


Updated 5/9/19: Just received an email from Sisters in Crime L.A. explaining what brought LAst Resort back out into the limelight and it's pretty darn cool:

Georgia Jeffries just let us know that the 2017 Anthology, LAst Resort, has been selected as one of the May Book Club Central offerings, sent to libraries and book clubs by SinC National. Every month, National randomly selects several books from the many submissions and features them in newsletters sent to libraries across the country. This month's theme was anthologies. We're so excited that LAst Resort was chosen.