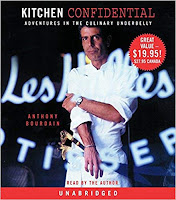 Gotta admit, I never watched Bourdain's TV shows so I never realized what an incredible storyteller he was. I figured that at out about one paragraph in. I'm also glad that I got the audiobook - this story really has to be heard in his voice.

Bourdain isn't kidding about the "culinary underbelly" thing. As opposed to the polite behavior you see on TV cooking shows, Bourdain's description of a day in the life of a working restaurant cooking isn't for the faint of heart. It's a tough life that you have to be totally committed to, and Bourdain was wholly committed. He also had a number of sad tales of restaurant owners who got into the business for all the wrong reasons. Warning: just because you're a good cook and entertaining host, don't listen to your friends when they tell you that you should open a restaurant. Just don't.

One thing that was tough about listening to Bourdain read this book, which was released in 2000, was knowing that years later he would take his own life. When you realize what an amazing life he led, it's even harder to fathom why he would give up on it. There were two stories in particular that were sadly ironic. In one, he described being in a taxi with three of his druggie cohorts and blurting out that only one in four addicts who go to rehab will actually kick drugs, and he made it clear that out of the passengers in the cab that night, he was going to be that one. The second was even more ironic, when he had to talk down an employee who had to fire a guy in the kitchen who wasn't hacking it, then was consumed with guilt when the fired guy went home and committed suicide. It's understandable that the only person responsible for the death is the person who committed it, but it's also understandable that the guy who fired him felt terrible about it. Bourdain - at the time, anyway - had no patience with this. Again, hindsight is 20/20. It would have been a sad story even if Bourdain was still with us. It was even sadder knowing why he isn't.

Even though a lot of the foreign cooking terms that roll off Bourdain's tongue might be unintelligible to most readers/listeners, I still highly recommend the book. Bourdain led a wild life and a fascinating one. There's a reason this book made him a star.

Pretty much every paragraph in the book is quotable, so I'm just going to have to pull one at random:

I saw a lot of bad behavior that first year in P-Town. I was impressed. These guys were master criminals, sexual athletes compared to my pitiful college hijinks. Highwaymen rogues, buccaneers, cutthroats, they were like young princes to me, still only a lowly dishwasher myself. The life of a cook was a life of adventure, looting, pillaging, and rock and rolling through life with a carefree disregard for all conventional morality. It looked pretty damn good to me on the other side of the line.

Posted by Melinda at 11:40 AM
Labels: Books, Cooking