Recent reading: "Thank You For My Service" 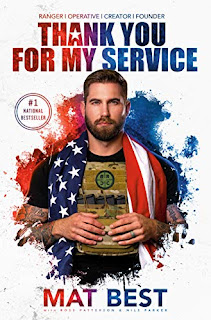 Former Army Ranger Mat Best is one of the co-founders of Black Rifle Coffee Company, a veteran owned company that happens to make great coffee as well as YouTube videos that are hilarious (unless you have a problem with rugged men with a fondness for high powered guns, gorgeous women in American flag bikinis, patriotism, booze, dogs, guitars, and of course coffee).

At the age of seventeen Best decided to follow his father and older brothers into the military. Unlike the senior Bests, who were Marines, Mat aspired to be an Army Ranger. What follows is a rollicking, insane story of five deployments to Iraq and Afghanistan, plus five years working for a private military contractor. And he enjoyed every minute of it.

It's also an opportunity for civilians to get a behind the scenes glimpse into the reality of war that we don't get from Hollywood and the media. The dedication, patriotism and unimaginable courage tinged with the trademark humor that helped keep Best sane in the face of daunting evil and violence is a view of warfare most of us will never see or imagine.

During one of his private contractor deployments Best was surfing social media and found himself irked by what he describes as "this pathetic chorus of first-world whining" by people who would have withered in the face of what Best and his military brothers faced on a daily basis. This prompted Best to grab his guitar and and vent in song. The result was "Champagne Facebook Problems", the video of which would eventually garner a following mainly among his fellow military types. This led to a journey that would produce more videos, a larger following, and eventually the formation of Black Rifle Coffee Company.

My only complaint is that he didn't include stories behind the BRCC videos. When I first saw one, I was so intrigued by the videos (and the idea of supporting a company made up of veterans) that I ordered a bag, then another. When I ran out for some reason I picked up a bag of Starbucks at the grocery store...which eventually got thrown out. It tasted like crap compared to BRCC. Now I order two bags at a time (I'm partial to the AK-47 Espresso Blend).

But the book wasn't written for BRCC fans or even for civilians. Best makes it clear that he wrote the book for guys like him: soldiers who loved to fight for their country, loved to kill evil bastards, and didn't return absolutely wrecked by the experience and who might have felt alone due to the constant portrayals of veterans as consistently damaged and traumatized. He wanted them to know that there were others like him and that they are thriving as civilians.

And while some veterans do suffer from those issues, if Law & Order did an episode where a soldier killed someone, it was never because he was an evil prick who happened to be in the military (the Marines, obviously) it was because he'd done a tour in Iraq and he saw his best friend die in an IED attack and it broke his brain and then he came home and everything was different and he couldn't sleep and it made it hard for him to hold down a job and then he got evicted from his apartment and then his girlfriend fucked his best friend and took his dog. Blah, blah, blah, blah, blah. Every veteran story was just this endless parade of horribles. What they failed to show, time and again, was my experience, which was the same as the experience of the hundreds of veterans I've known and served with who loved their time in the military and to this day view is as one of the most important, meaningful, enjoyable periods of their lives. No matter where you looked, there was no appetite for our stories anywhere.