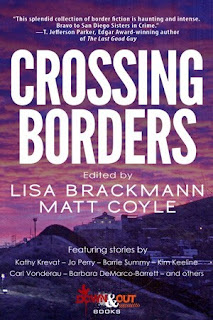 A bit of setup: I was at a point where I was partway through four - FOUR - separate books. I also haven't been reading much lately. Not sure why, except that I've been indulging in my two favorite time wasters -  crossword puzzles and playing Scrabble versus the computer on Kindle. So I decided my goal for the next week (or however long it takes) would be to finish those four books.

First up is Crossing Borders, which as you know if you've read the blog includes my short story, "Like Deja vu All Over Again". The anthology was commissioned by the San Diego Chapter of Sisters in Crime to celebrate Left Coast Crime being held in their town this year. Unfortunately LCC happened in the middle of March, just as COVID-19 was rearing its ugly head, and ended up being shut down after the first day (one of the casualties was our launch party for the anthology). We were also scheduled to do an in-store event at Mysterious Galaxy in San Diego in April which was also cancelled.

The blurb from the back of the book:

Good stories start with characters crossing borders and finding themselves in worlds filled with hurt, harm, and danger. In Crossing Borders, the first anthology from Partners in Crime, the San Diego Chapter of Sisters in Crime, fifteen stories capture moments before, during and after characters cross borders and find themselves stumbling around strange lands that abound with saints, sinners, and monsters.

It's always interesting to see how different writers address the assigned theme and the wide variety of the stories that result. There are some good ones here, but my favorites (excluding my own, of course) were "Sandman" by B.J. Graf and "The Crossing" by Kim Keeline. When you start your story with "Malibu, 2041" you've got my attention, plus I'm a sucker for a Hollywood-related story. Graf did a great job of integrating potential technology of the future in "Sandman" without it taking over the story, although it did factor in the outcome. "The Crossing" has its main character attempting to cross the U.S./Mexico border with an unexpected twist outcome to her journey. I did get a bit of a jolt reading it - both "The Crossing" and "Like Deja vu All Over Again" begin with their protagonists being carjacked while driving Toyota Corollas, but go off in very different directions with very different outcomes.

I'm going to be a jerk and quote from my own story:

Just a nightmare. A very vivid nightmare, one of those really realistic ones, but not real. Yet I was uncharacteristically rattled by it and my heart seemed uninterested in calming down. For a split second I'd been there in my car, wide awake, being driven away by a total stranger and no doubt headed for a very bad ending.

Note: This story was based on an actual nightmare I had about being carjacked back when I had my little Corolla and waking up dissatisfied about how I'd handled the situation in my dream.