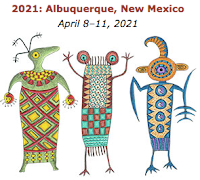 Last March when Left Coast Crime San Diego had to shut down on its first day, all eyes looked forward to next year's conference scheduled for April 2021 in Albuquerque. I know mine were.

Due to the uncertainty of holding large gatherings in the spring of 2021, the Left Coast Crime 2021 convention has been rescheduled for April 7–10, 2022 – same place, same week in April, just a year later.
The Left Coast Crime national committee is making this decision now because we cannot count on having favorable government policies and the hotel's ability to provide necessary services by next spring, as well as the willingness of our Left Coast Crime community to travel with confidence. We’ve been in continual conversations with hotel personnel and sought assurances from the State of New Mexico, but no one can say when conventions can resume, even in 2021.

I don't know about the rest of you, but I'm sick of the new normal.

I do want to give props to the LCC organizers for the work they're doing. Hopefully by the time April 2022 rolls around we will all get to see their hard work finally reach fruition.