We have cover art and a release date!

This is the cover of The Fish That Got Away, the anthology that includes my short story "The Legend of Bahama Bobby". This is the one that was supposed to come out in March but got delayed, and will now be available June 21. So far it's not listed on Amazon and the authors are waiting for instructions on how to order it from the publisher, so unfortunately no link for now. 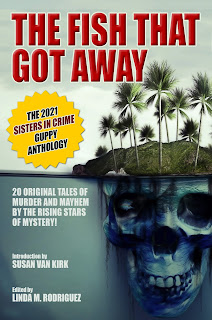 I've avoided discussing this one because it wasn't the usual fun, easy-peasy editing experience that I've had with my other stories. First of all, I totally misread the editing schedule, which gave us an entire month, then seemed to indicate a second re-editing month. Turns out that there was only the first month. So that was a massive fuck-up on my part as I didn't finish editing by the deadline and I got reamed for it.

The other issue is that this is the first experience I've had where I had to delete a major aspect of the story because the editor didn't like it. I didn't realize that her comments about it weren't open for discussion, so I tried to explain why I had it in there and why I thought it was important to the story. The main aspect of the story was people keeping secrets, both their own and others. It turned out that by going to bat for this part of the story I just pissed her off some more after the deadline fiasco. I really got the idea that she just didn't like the story at all.

At the time it was only my third time getting accepted for publication. I had a great deal of confidence that the story as it had been submitted (and accepted) was strong, partly based on the fact that it was the co-winner in one short-story contest (Moondance International Film Festival) and also picked up an Honorable Mention in a genre short-story contest (Writers' Digest Annual Writing Contest). But at this point in my writing career I wasn't really in a position to dig in my heels to defend the story as written.

In addition, the genre is in some ways a very small community. You see a lot of the same names popping up not only in print, but also at conventions and in classes and newsletters, and I certainly didn't want to gain a reputation for being difficult. So I made the changes and apologized profusely, and tried to put it down as a learning experience, which wasn't easy as I'm pretty hyper-sensitive and it's hard for me to blow off a negative experience like that. But at some point you have to move on.

Luckily, about two weeks later, I had another story accepted and my experience with that editor could not have been easier or more pleasant, so that eased some of the sting. She was extremely complimentary about the story, the voice, and especially the ending, and had me re-write all of one sentence for clarity. It couldn't have been easier. That anthology, Avenging Angelenos, was the one that was supposed to be published in April, but it's also been delayed. Hopefully we'll get some news on that one soon.