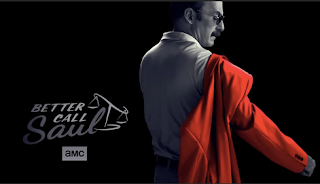 Well, sadly, it's over. Monday night marked the end of not only Better Call Saul, but also of the entire Breaking Bad universe. Although Vince Gilligan hedged his bets with, "Never say never," not only does he not have any plans for future projects in this world, he's already moved on to his next, non-BB/BCS show. With the cast aging and the braintrust moving on, it doesn't seem like we'll see any further adventures of Albuquerque's criminal and legal masterminds.
So how did it go? Kind of the way it had to. Not all tied up in a bow with Jimmy and Kim reunited to live happily ever after, not in a hail of bullets like its predecessor, but looking back on it, it kind of ended not so much the series but the saga of Jimmy McGill/Saul Goodman/Gene Takavic the way it inevitably had to end, with all his misdeeds catching up to him and forcing him to make a decision on how - and in which persona - to make his final stand.
Thoughts:
And that, Dexter peeps, is how you do a series finale that doesn't make the fans hate you.
Posted by Melinda at 1:19 PM
Labels: Crime, I Customer, Television, Writing